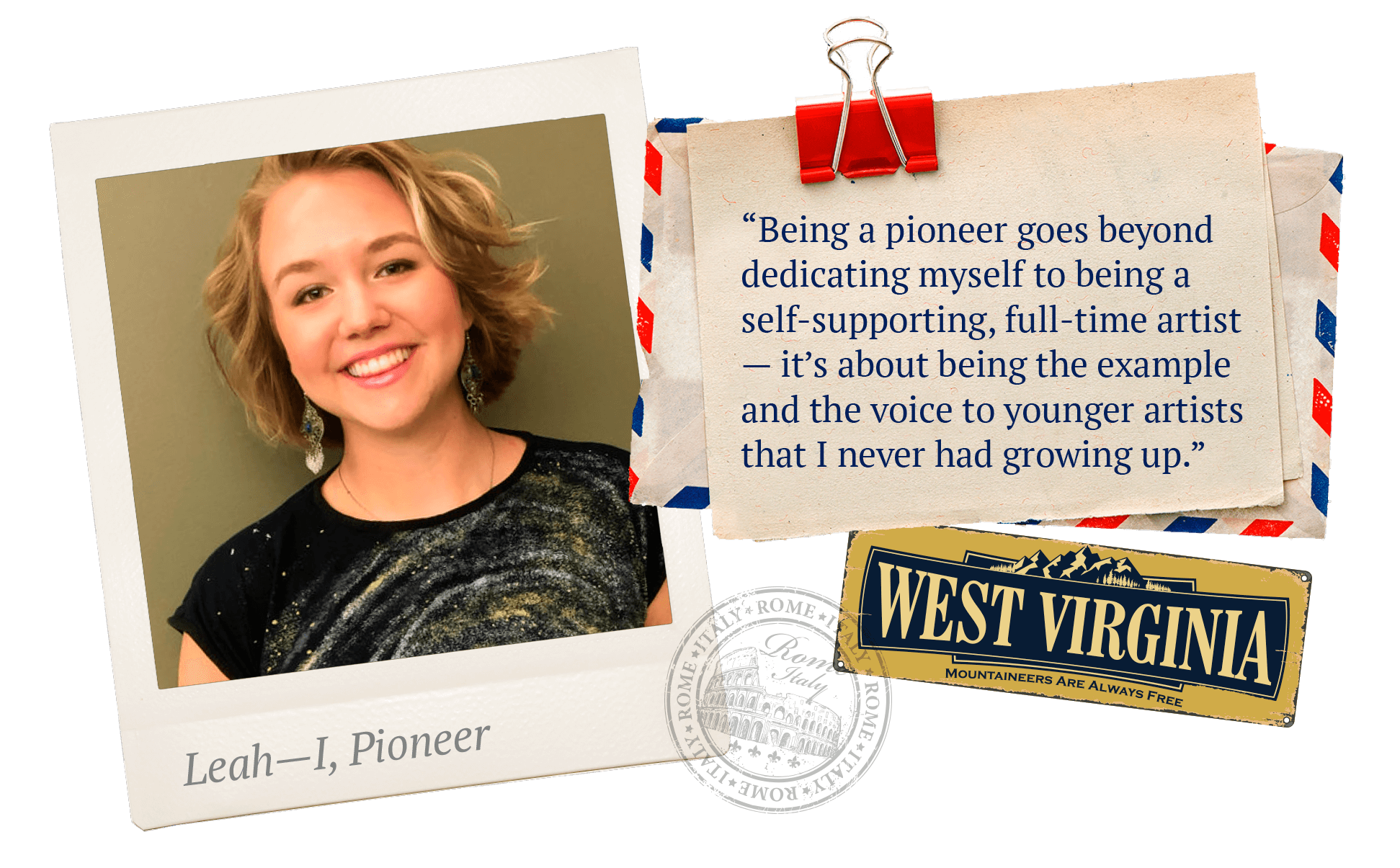 For Studio Art major Leah Seaman ’21, the thought of becoming a “starving artist” was never what brought her sleepless nights laden with anxiety — it was the idea of having a typical 9-to-5 desk job doing the same work for years on end.

Coming from a small town in rural West Virginia — population of less than 3,000 people — this daughter of two entrepreneurs began creating commissioned works in high school.

“For the past six years, making art was a way for me to make sure my parents never pushed me to get an ‘actual job’ — and please make sure you use air quotes with that! My parents never pressed me to work in a restaurant or things like that because I was so busy earning an income with my work. The more I did it, the more my parents were like, ‘Oh, you’re actually making a living. You’re fine, you keep doing that because we can see you’re maintaining your work ethic.’ And it felt natural because I never really saw any other options.”

Leah works in a variety of mediums and her work has garnered interest both inside and outside the art scene. Most recently, two pen drawings were selected for the 2020 Emerging Artists Exhibit by The Arts & Culture Center in Charleston, West Virginia. One other drawing from that same four-drawing series was included in the 2019 Juried Art Exhibit, as well. She also sells hand-painted customized clothing — from jackets to graduation caps — and is a widely sought-after commissioned artist whose works have been created on barns, an old mill saw and a school bus, in addition to traditional portraiture. 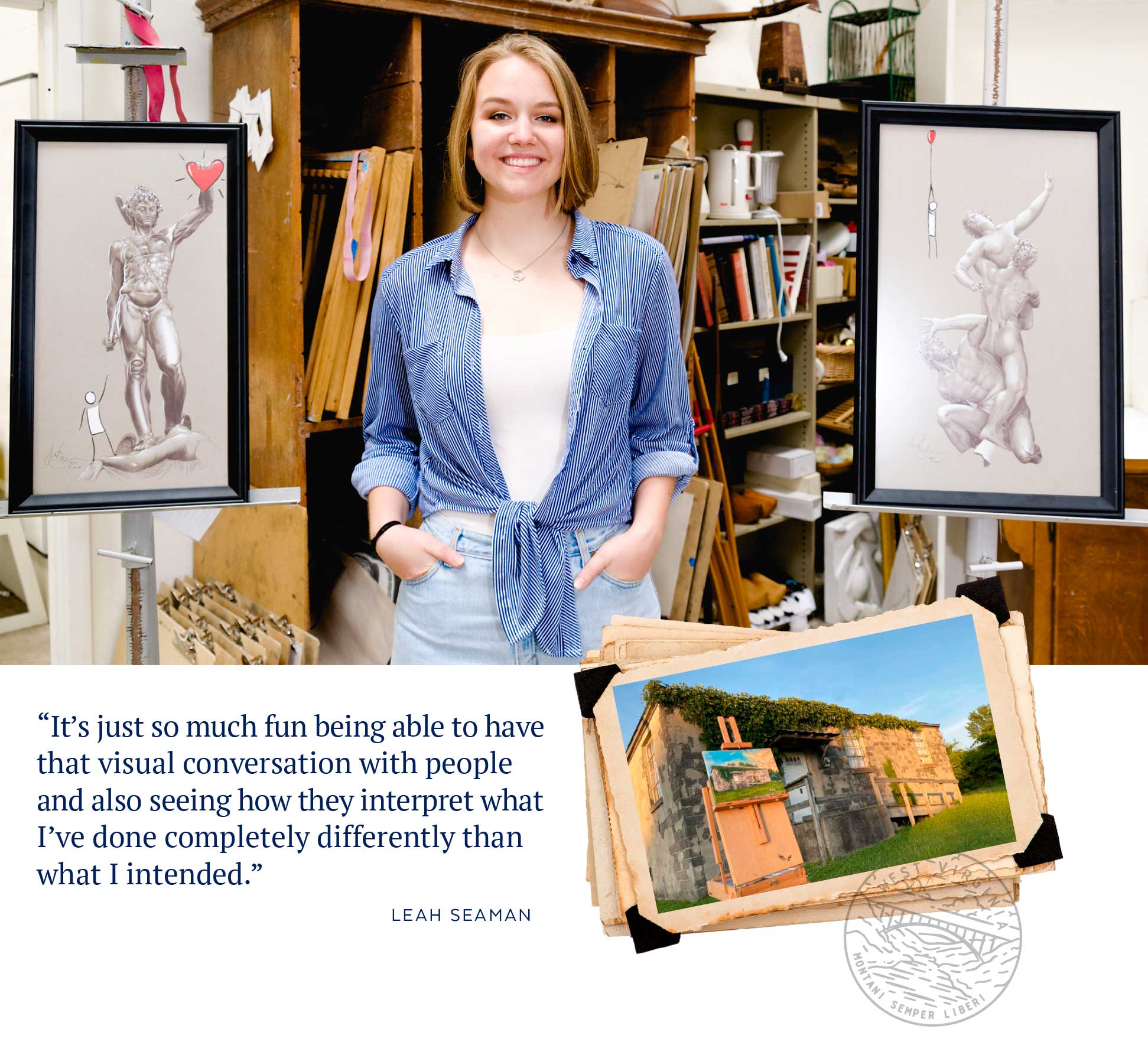 Above: Leah poses in her studio with drawings created during her study abroad in Italy.
Inset: Leah creates work in her studio as well as on location.

During her time at Marietta College, she worked with the Entrepreneurship Program and the PioBiz Competition to help develop a business plan that will allow her to create an art company, under which she will be able to continue producing commissioned work and customized apparel, as well as pursue her own personal works for exhibit.

“As far as what motivates me to create in the morning, my favorite thing about art — and this is ironic because, as a Communication major, I love to talk and I have a lot of words — but most of the time, the only time I really feel like I can ever communicate is when I’m creating visually. Because that’s the time that people can really connect with what’s going on in my own mind. And it’s just so much fun being able to have that visual conversation with people and also seeing how they interpret what I’ve done completely differently than what I intended.”

When considering herself a “Pioneer,” Leah says it goes beyond dedicating herself to being a self-supporting, full-time artist — it’s about being the example and the voice to younger artists that she never had growing up. In addition to working nearly nonstop on commissioned works for her patrons, during the pandemic, she began mentoring a group of girls in her hometown of Philippi, West Virginia. She wants to be the example she never had — a full-time artist from a low-income, limited-resources community who allowed herself time to identify and develop her passions in life.

“I said it so much over the summer, I probably annoyed my girls: You do not need to know at all what you want to do right now. There is no part of you that needs to know that because you have not lived enough to figure it out. And if someone tries to pressure you into figuring out what you want to do or make a huge financial decision based off of zero life experience, then you need to tell them to re-prioritize their advice. It’s so much pressure to put on young people and I had so many nights of anxiety because I felt so much pressure to identify ‘the career.’ The career kind of surprised me.”

While many people struggled with the isolation aspect of the pandemic, Leah felt justified in being able to work in her art studio for hours. The pandemic gave her the time that she needed to isolate herself in a way that helped her grow her work.

“Over the (2020) summer, I was cranking out work. I was waking up at 6:00 and going to bed at 11:00, trying to get as many pieces done as possible before I came back to school. A few of my patrons sent me videos of the pieces they had me do when they gave it to their loved ones. I called my mom the other day and said, ‘I feel like a superhero right now. I did that.’ That’s so cool to see in the midst of all this insanity, someone found joy in something I spent time doing. Sometimes, when I get down, I’ll watch those videos and think, ‘It’s all cool. It’s bigger than me.’”