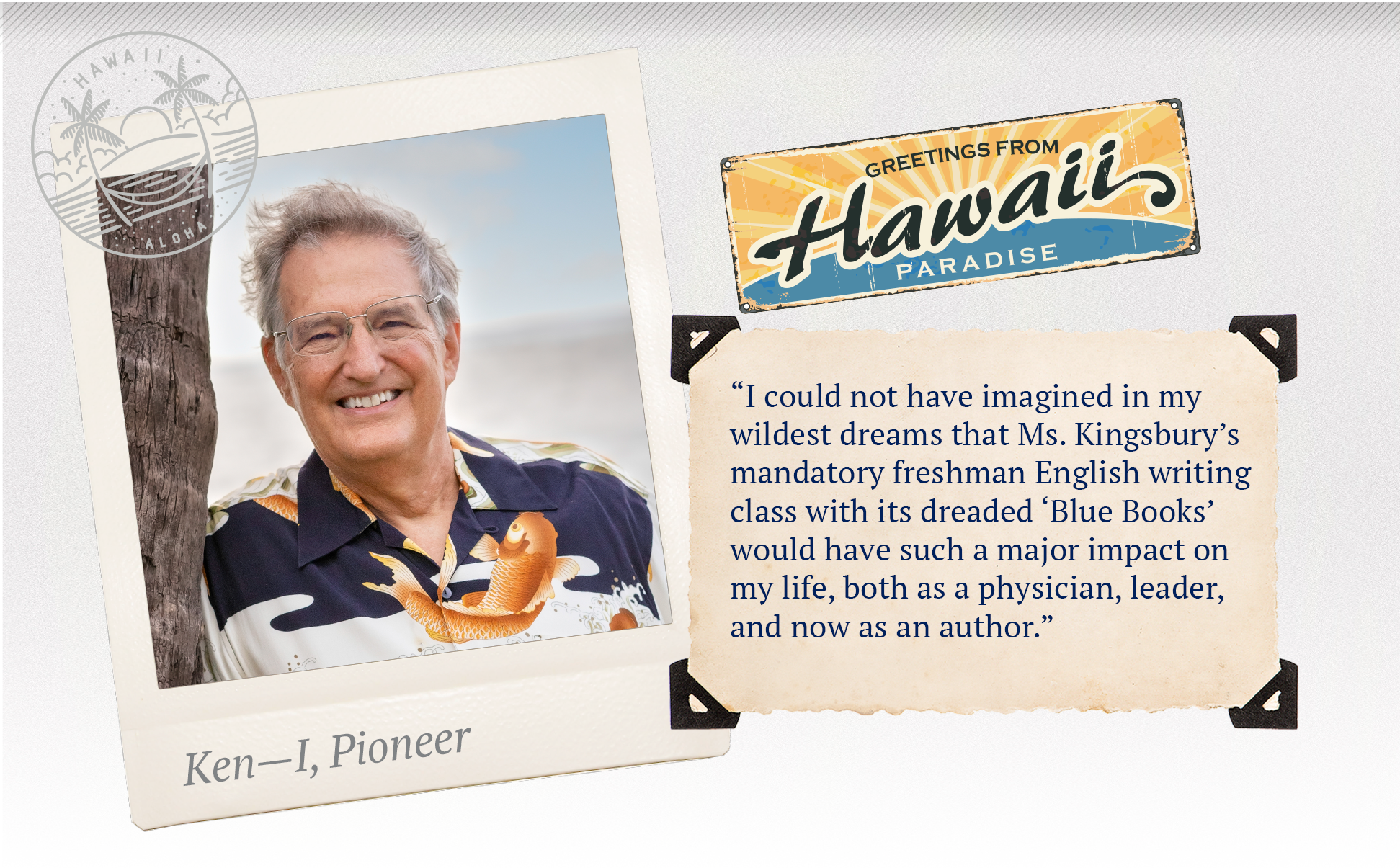 From being a decorated medical officer in the U.S. Navy to becoming a published author, Dr. Kenneth Andrus ’70 understands what it takes to reach whatever goals in life you may set for yourself: preparation.

After he earned a degree in Biology from Marietta, he continued to medical school — following the medical path of his father, who was a physician, and his mother, who was a registered nurse. He completed his residency and was Board Certified in internal medicine at the Naval Hospital in Portsmouth, Virginia, and he decided to pursue a career in the U.S. Navy. After 24 years, he retired at the rank of Captain. He began a private medical practice but then returned to public service to work for another 12 years with Veterans Affairs.

“And that brings me full circle back to Marietta. I could not have imagined in my wildest dreams that Ms. Kingsbury’s mandatory freshman English writing class with its dreaded ‘Blue Books’ would have such a major impact on my life, both as a physician, leader, and now as an author. I learned how to express my thoughts in writing in a coherent way, notwithstanding this short piece. These statements come with a caveat. In the era of full disclosure, I must admit that I still can’t spell worth a flip — so a shout out to Spell Check — well, unless I’m muttering under my breath, ‘Curse you, spell check.’ ”

As an avid reader, Andrus enjoyed authors like James Michener, Allen Drury, Allen Eckert and C.S. Forrester. It was his time in the service that provided a focus for his newest career as a novelist.

Listen to a podcast with Dr. Kenneth Andrus '70 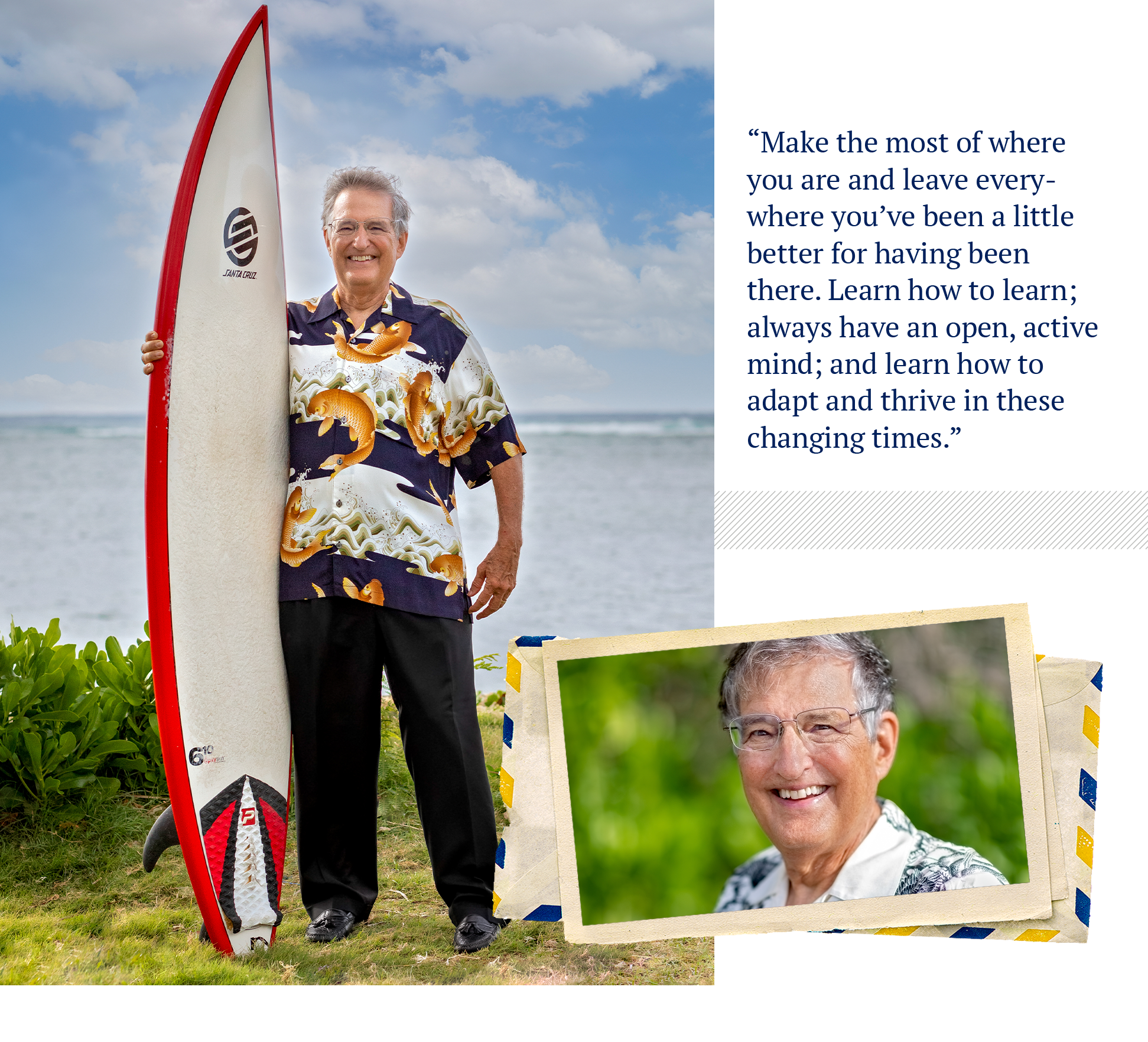 Above: From the dreaded blue books in Prof. Mary Anne Kingsbury’s freshman English class to serving as the Command Surgeon for the U.S. Navy medical forces in theater during the First Gulf War, Dr. Kenneth Andrus ’70’s life experiences have played important roles in helping him with his newest career as a novelist.

“What really drove me, though, was my experiences in the First Gulf War where I served as the command surgeon for the navy medical forces in theater. I won’t go into the details, but I felt compelled to write a book that provided some insight into the incredibly difficult decisions that had to be made that could not be espoused in a 30-second sound bite on the evening news, i.e., those behind the scene decisions that began with the president and how those decisions impacted the men and women on the front lines who had to execute the mission.”

Of course, his medical and military experiences provided the heart of his book ideas — but he still needed to prepare for the actual writing process.

Andrus said new authors are usually advised to “write what you know,” but he also adds to really get to know every character.

“The other trick to writing a thriller in the general class of a Tom Clancy novel is to get the details right. With my readers, if I make a mistake on some technical detail, they’re likely to close the book and move on. Research, research, research. Even if you only use 10 percent of what you’ve filed and written in your outline. Sigh — yes, an outline. There’s no way you can get your story arc correct without one. Thinking of just sitting down and knocking out a three-hundred-page novel? Dream on.”

In addition to the military-based thrillers, Flash Point and Amber Dawn, which are part of his Defender Series, Andrus authored, Congratulations, Your Daughter is Engaged. Now What? A Father’s Emotional Survival Guide, a book that proved to be just as challenging to write as his longer novels because of its emotional and personal nature.

With the vantage point of someone who has delved into and succeeded in complex professional fields, Andrus offers his insight — with zero arrogance — into his ability to have fulfilling careers in medicine, the military and in the publishing industry.

“Life will present many second or third chances be it your education at Marietta or in life. Seize the moment, seize the opportunities when they present. Never leave yourself in a position to say, ‘If I had only done ….’ Make the most of where you are and leave everywhere you’ve been a little better for having been there. Learn how to learn; always have an open, active mind; and learn how to adapt and thrive in these changing times.”