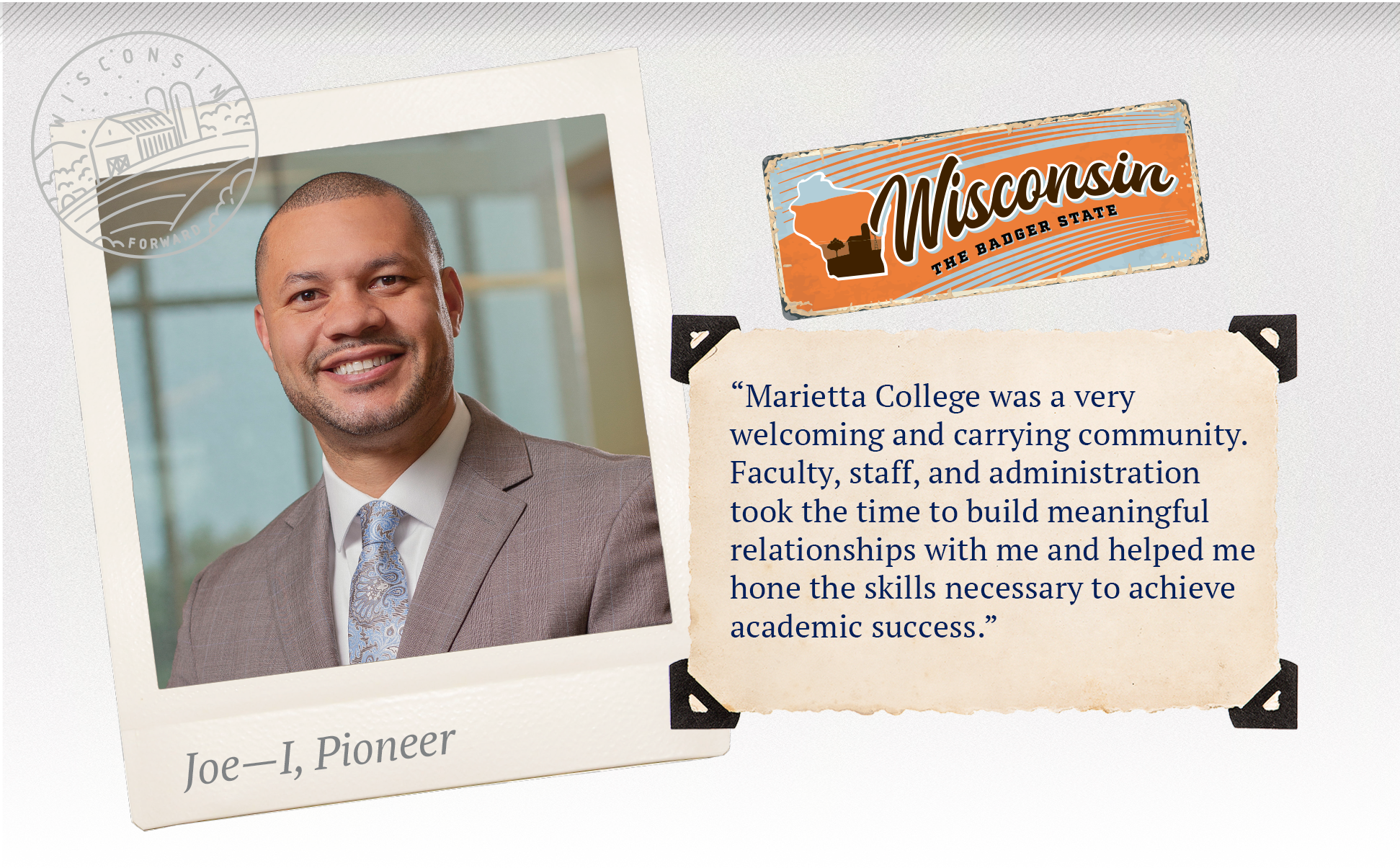 Joe Webb ’07 remembers the Sunday morning he and his roommate Scottie Nelson ’07 — both Marietta College sophomores at the time — were in a church ready to be baptized. The two young men were brought to church every week by their football coach, Todd Glaser, and his family, and Bob ’64 and Jan Springer.

“I was standing in front of the congregation and I had asked the pastor, ‘If God really loves me, why did I grow up the way that I did?’ And the pastor told me something that always stuck with me, even until today. He said, ‘Joe, God will never put you in a situation you can’t handle.’ ”

Growing up in foster and group homes in the Pittsburgh area, Joe caught the eye of college football coaches and, once he aged out of the foster care system, earned a full-ride scholarship to a Division II school in Pennsylvania. Though it provided him the opportunity to attend college and have a place to stay on campus while classes were in session, the university didn’t provide a reliable home for the 18-year-old.

“I remember the first Thanksgiving break I slept in the bushes outside of the residence halls due to the campus closure for the holiday break. However, I blame myself primarily because I never asked for support then. I was embarrassed. I didn’t seek out help from faculty or staff or my coaches, so I just tried to make it on my own.”

After connecting with his high school football coach, who was working with Coach Glaser to help his players get recruited, Joe had a conversation with the Marietta coach, who described the institution, where it was located and the types of academic programs it offered, as well as the offense Glaser’s football team ran. Within two weeks, he applied, was accepted and was on his way to Marietta College as a transfer.

This time, Joe made it clear what his situation was and the types of help he would need to be successful. He also worked his tail off to achieve his goals.

“I was involved in football, track, I was a senior interviewer in Admission for two years, I was involved in the (Charles Sumner Harrison Organization) — we actually developed it and it was named after the first African American to graduate from Marietta College.”

Joe was a senior interviewer for two years because he was on campus year-round.

“One of the ways that Marietta College supported me is that they understood my upbringing. I grew up in over a dozen different foster homes and group homes, so when I left the foster care system after graduation, I was no longer considered a ward of the court, I had no family to go back to over the Christmas, Thanksgiving, and summer breaks. Marietta allowed me to stay in the residence halls all year long.”

During the academic year, Joe would take families of prospective students on campus tours, and in the summer, he would work for both the Physical Plant and the Office of Admission. When the College would be on a break, faculty and staff would invite him to their houses for dinners and special gatherings. It was his work in Admission, as well as regular conversations with Coach Glaser and the Springers that inspired him to pursue higher education. He still speaks with the Springers multiple times each week to this day.

“Bob and Jan Springer became the closest thing I ever had to a mother and father. They were even at my wedding representing me as my parents. They took me in and helped build confidence in me at a time when I didn’t even believe in myself and helped me focus more so on my future and less on pondering about my past.”

After earning a Bachelor of Arts in Communication from Marietta, Joe followed Coach Glaser to the University of Wisconsin-Eau Claire to attend graduate school and be an assistant coach for the football team.

“As happy as I was to graduate, I was just as sad because Marietta was more than an institution of higher learning for me; Marietta was my home. I lived there four years year-round, and I never lived anywhere four years consecutively before. I’d always bounce around from home to home, so I was sad. If Marietta would have told me, ‘Joe, you can stay for four more years and get another degree,’ I probably would have done it.” 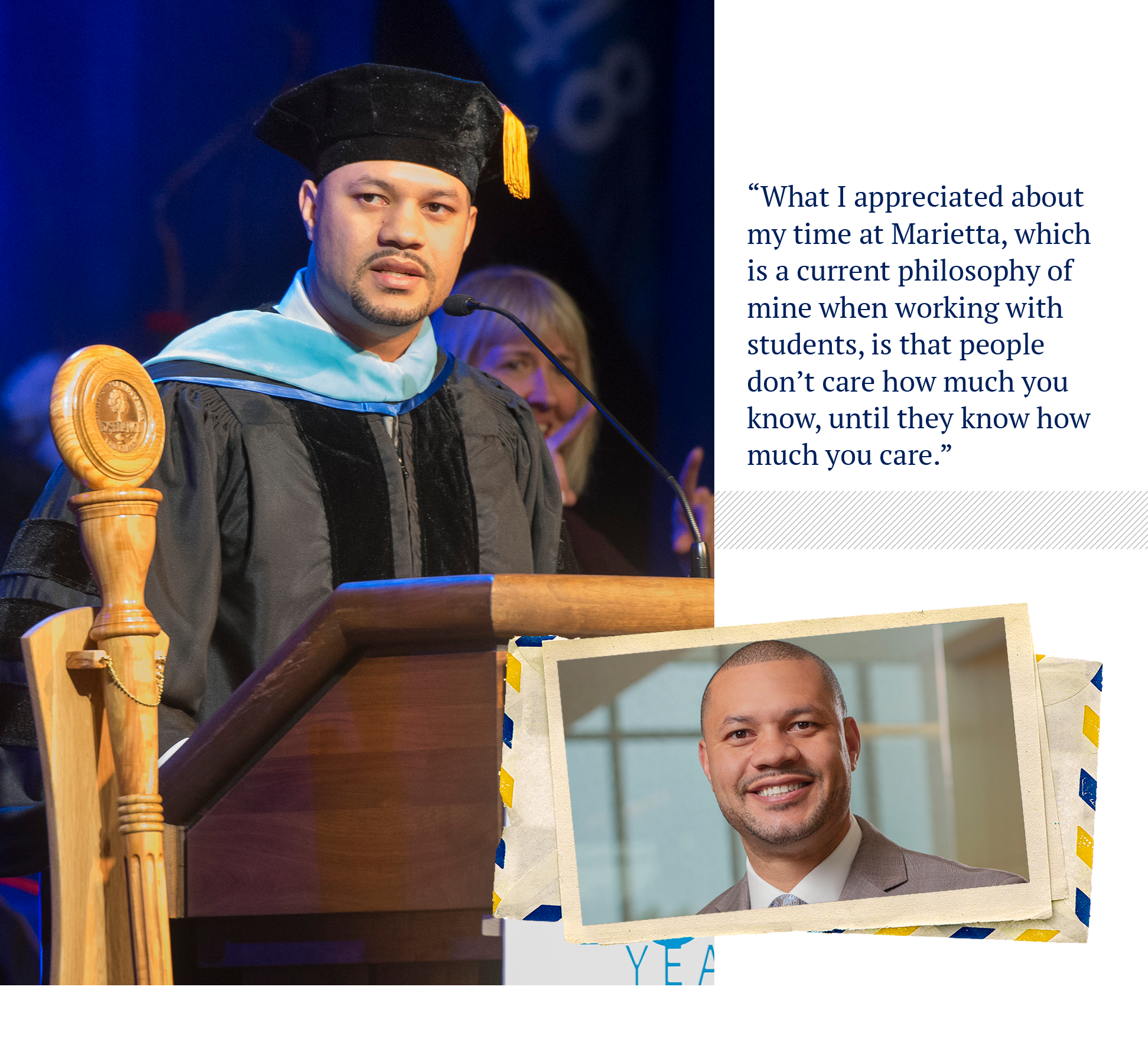 What I appreciated about my time at Marietta, which ties into a lot of what I do today, is that they didn’t look at me for who I was but for the potential in me and helped me hone the skills that I needed to achieve the level of skills that I desired.

As he began his graduate school work and his role as an assistant coach — with the goal of one day becoming a college football coach — he realized that coaching was not what he was passionate about. After a year, he transitioned into recruiting students and found a great deal of success in attracting players to the institution. Eau Claire’s Admission Office took note and invited him to recruit undergraduate and, eventually, graduate students.

After coming back from a two-week recruiting road trip, he received letters from two students he had recruited informing him that they were leaving the university because they didn’t have high enough grades to remain. He began inquiring about other students he brought in, only to learn that many of them were no longer enrolled.

“It’s easy to get them in, but what’s going to make the difference in their lives is getting them out the door with that degree.”

He left the Admission side of student enrollment to focus on student retention. He started work on Student Success Theory, began research on “Appreciative Inquiry” and implemented an Appreciative Instruction course for first-year students going into their second semester with less than a 2.0 cumulative grade point average. He knew he was making a difference.

“That course had about a 95 percent retention rate of all students who already displayed at-risk behaviors in terms of academics. From there, I got hired at Thiel College in Greenville, Pennsylvania, as the Director of Multicultural and International Programs. Same thing — I assisted with both the recruitment and the retention piece, implemented student success programs, really loved the work I was doing there and the institution was a small, private, liberal arts college. It reminded me of Marietta.”

His then-girlfriend, Maria, who is now his wife, was working at Penn State — a six-hour-drive from Thiel — so Joe decided to look for work closer to her. He was hired at Penn State, initially as the Director of Student Support Services, overseeing the Veterans Affairs Office, off-campus housing, all retention initiatives, the Aspiring Scholars Program, and the multicultural and international programs. He also enrolled in a doctoral program. The opportunity arose to fill the role as the Interim Director of Student Affairs and Enrollment Management, which he took and eventually earned the full title and then rose to Senior Director of Student Affairs and Enrollment Management. Always wanting to learn and grow, Joe made sure to observe how the Board of Trustees, the university president and other leaders communicated through their words and their body language.

“I learned how to navigate politics, which is a big part of how decisions are driven; I learned about shared governance, educational policies and procedures, theories and models of student development, allocating financial and human resources, student affairs data collection and analysis, fundraising, crisis management, and best practices for hiring. Most importantly, I learned that the essence of leadership is influence, and the essence of influence is understanding.”

Joe wasn’t finished setting goals for himself. He thought it would be a few years before an opportunity to advance his college career would come around, but his work ethic and his ability to lead made him a standout candidate for a new role.

This year, he was named the Vice President for Student Affairs at St. Norbert’s College in De Pere, Wisconsin, after being approached by a search firm. While much of his work is focused on the administrative side of Student Affairs, he makes a concerted effort three days a week to have lunch in the cafeteria with random students, and he also engages with students in the gym, attends student events and speaks to classes about being engaged.

“I chose this career to pay it forward and to help students achieve academic and personal success. I always tell students ‘There’s nothing you can ask that I haven’t asked for myself and I will never ask for anything in return except for when you make it, you pay it forward and help out somebody else. I look at this work as more than just a career, but a vocation, it is what I was called to do.’”

Joe, his wife, Maria, and their children, Emilio, 7, and Sofia, 9, have settled into living in De Pere, and found the town very welcoming — and the move also gave Joe the opportunity to reconnect with another member of his Marietta College family.

“Interesting thing — Jason Vrable lives 10 minutes from me, and when he found out I was coming to De Pere, he introduced me to a local realtor, got my kids connected to the community, and helped my family get settled. I am grateful that Jason and his family took the time to help my family get acclimated to the community. Jason was my quarterback at Marietta College and is now the wide receivers coach with the Packers. … Our kids are playing flag football together on the same team.”

Taking a second chance at college by attending Marietta, Joe grew into becoming a learner, which made it possible for him to achieve an undergraduate, graduate and doctoral degree, as well as excel in his career. He is currently finishing his first book — Walking Both Sides of the Street: The Road to Academic Success — and has been asked to speak at 30 colleges and universities over the past 10 years to inspire thousands of students with his story.

“In today’s society, with constant changes in technology, career fields, we’re trying to prepare students for careers that aren’t even created yet. One of the things that Marietta has done a great job of — and I think I’m a great testament to this — is preparing students to be lifelong learners and how to adapt to the constant changes in the workforce. During my years at Marietta College, I learned that failure is not fatal, and success is not final. That’s one of things that I have taken away from my experiences there that continues to follow with me beyond my time there as an undergraduate student.”